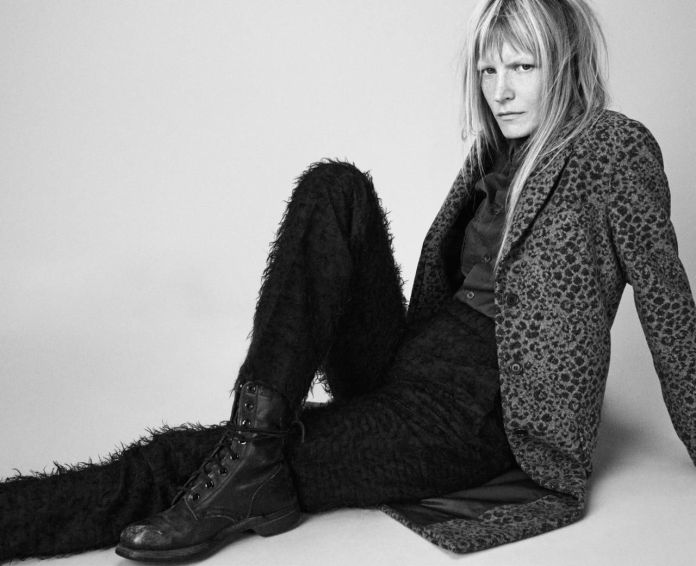 Kirsten Owen, the iconic 90s model who represented anti-establishment grunge, spent her childhood in an old log house in Eastern Ontario with her mother and two older sisters. The rugged and raw backdrop of her youth would provide a huge contrast to the dizzying heights of the fashion industry and the coveted circle of models she would later find herself in. Kirsten transcended what it meant to be a model and became not only a muse to many in the industry but the face of a movement, imprinted in time. I spoke to Kirsten by phone as she recalled her humble beginnings and reflected on her legacy.

How were you discovered? Was modeling something that you always had an interest in?

When I was 12 we moved from Eastern Ontario to Toronto and that’s when people started saying that to me that I could be a model. I was a really shy and quiet kid and didn’t have a group of friends, but when we moved to Toronto I fell in with this crew of punks who took me under their wing. I finally felt included in something and left home when I was 14, but I didn’t start modeling until I was 17. Between those years I was living with my boyfriend, and then when I was 16, I started working at the Big Bop in Toronto. This other model who used to hang out at the club told me she was going to introduce me to the owner of the agency she was with. She dragged me into the Judy Welch agency in Toronto where I was signed but I didn’t do much modeling until I went to Paris a year later.

This would have been the late 80s, right? I know that you did the cover of Elle, among other things, and then there was a gap. Was that a conscious decision you made?

No, I think in modeling it always ebbs and flows. When I started in Paris, I was doing a lot of Marie Claire, French Elle, and some British Vogue—stuff like that. I was 22 when I had my son, and I decided to go and live in New Mexico. At that time the mentality was once you have a child, you are done. I got a call from my agent saying Helmut Lang wanted to fly me to Paris to be in his show. This was the third or fourth show for Helmut that I had done. I wasn’t really expecting that, but I was happy with it. I did the show and then decided to move back to Paris because more stuff was happening and I realized that I had to be working. Then I worked with Juergen Teller for i-D. At that time, this was the early 90s and I hadn’t really been thrown in with those creatives in the business yet. I was doing more safe kinds of work. 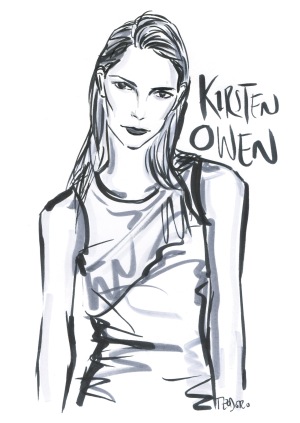 I grew up in the north of England with magazines such as i-D and The Face in the nineties. My first impression of you as a model was this edgy, cool girl. Would you say Helmut and Juergen were your biggest advocates?

Yes. In the very beginning it was Julien d’Ys who took notice of me and made sure I went with him to meet Paolo Roversi at Studio Rouchon in Paris where he was shooting the first issue of Italian Elle. Paolo and I immediately had a strong connection and he shot me for the cover.

What do you remember about that time with Helmut and Melanie Ward? The three of you are arguably the most identifiable figures for that moment.

I remember it being the setting where I felt most at home, where I could be myself. I was happy. Helmut would make you feel like you could be emotional and you didn’t have to cover up and try and be this professional model. He was just really cool, really nice, and really warm.

How would you contrast modeling today versus when you began?

Going from film to digital really changed the mood. I love shooting with photographers now who want to shoot on film. It slows it back down to a calmer pace and brings back mystery.

How do you keep it interesting for yourself after all this time?

There was a moment in my career where I realized that I could bring more to it to avoid being so bored. When you are a model, you are just a subject and you think you don’t have creative control, but that’s not true. It took me a while to realize that I could get something out of it that was really interesting and enjoyable for me.

What do you think changed within you that made you have that realization?

After a few years, I realized that if I made a certain expression with my face or body it was more interesting and brought more to the set. That encouraged me to keep moving and trying to be more expressive, and I really began enjoying it.

You’ve managed to maintain your privacy in our increasingly connected world, which I find to be refreshing. Nowadays, a lot of decisions are driven by the number of followers and likes a model has. That kind of pressure is damaging. They already have enough to contend with, you know?

It’s becoming so superficial. It’s fun for some people to do Instagram and stuff like that. I enjoy it, but I really enjoy it when people post really honest photos/comments instead of always pretending everything is so great in their life. I just can’t stand that.

My daughter is really into fashion and may go into design or styling or some aspect in fashion. She really enjoys social media, and she fits right in with that world in a good, fun, positive way. My son is not that interested in that; it’s not really his personality.

Was there a point that you realized you had made it?

Yeah, there was a moment actually. One of the happiest moments of my career was after a shoot with Paolo. It was the mid 90s and we were shooting Italian Vogue. At the end of the shoot, Paolo said to me, “Kirsten, modeling is an art and you are an artist.” I was like, oh my God! That was amazing, coming from him, you know. So that was the moment I felt I had made it, and I was feeling really successful.

Looking back, what advice would you give to your younger self?

I would say to myself just be really comfortable with other creatives in this business and not feel intimidated. I went through a lot of terrifying times when I felt like I knew nothing, but as I grew, I finally realized I can trust myself.

Posted on October 30, 2017 by theculturalomnivore in Female Models

One thought on “Kirsten Owen, Modeling’s Queen Of Cool, On Helmut Lang And Everything Fashion”