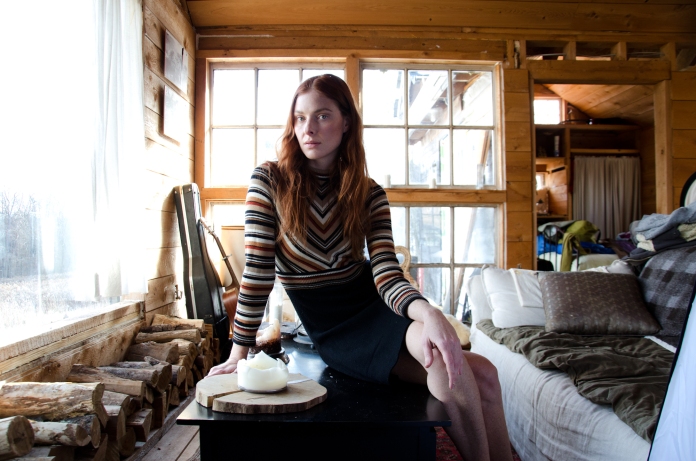 Born in Miami, Taylor Foster was scouted when she was just thirteen years old. She has walked the runways of Milan, New York, Paris and London for top designers and has appeared in international editions of Vogue, W, ELLE, Harper’s Bazaar, Marie Claire, Glamour, Cosmopolitan, i-D and Vanity Fair.

I called Taylor and talked about modeling, motherhood and her passion for the culinary arts.

I thought it would be best to start at the beginning. You were raised in Florida, is that right?

I was born and raised in Miami, oddly enough for a freckly red-head. Every time I say that, even people who I’ve worked with for years, look at me and are like, “that is the last thing I would expect”.

But yeah, I grew up there and people are always surprised by that. I remember I was about 13 and I walked to the corner stationery store. I was in there and this woman walked up to me and gave me her card. She was from Ford Models.

Were you familiar with the industry? Typically a lot of people approached are reluctant or suspicious because they don’t know much about the industry.

I didn’t know tons about the industry but I knew enough that I recognized the name Ford and I knew that she was legit even though I was still a little freaked out by it. I remember I went home and I told my mom, who had a brief stint in the modeling world in the sixties.

How did that conversation go with your mom?

She had some bad experiences as a model but I remember she told me that if I was interested then I should check it out.  She always kind of let me do whatever I wanted.

I had an older sister I dragged along with me and the agency signed us both. I remember my first shoot ever was with her. I wish I had those pictures but I never saw them. I don’t even remember what it was for.  I modeled a little bit and then I went to boarding school in Switzerland. I remember I gained a little weight when I was away and when I came back my agent sat me down and told me to lose weight. I was like forget it so I didn’t do anything with it for a few years.

How did that conversation go down with your agent?

I just remember thinking I’m not going to do that. I felt fine the way that I was. I mean, thankfully I didn’t get all crazy about it.

Many girls at that age are so impressionable and influenced by the media. I think it’s great that you were able to be so confident and knew your value at such a young age.

I just had a very strong sense of self.  Maybe it was the way I was raised,  I don’t know. It didn’t feel like some ultimate thing that I needed to aspire to. It wasn’t a big deal for me to walk away from it. It just made sense and that was it. I finished high school and then I went to a year of college and then I decided to go to culinary school.  At the time, there was a waiting list to get into the culinary school that I wanted to go to.

I had applied to a couple of programs and I wanted to travel. I remember I went back to Miami and thought maybe I should try the modeling thing again as a ticket to travel. I walked into a different agency in Miami Beach and I met with someone and he turned me away. As I was walking out the door, another agent came after me and told me the other agent didn’t know what  he was talking about. I just wanted to  go to Europe so then off I went and I lived in Milan and Paris. I did some shoots for ELLE and things like that and they kept trying to draw me back into the business. I didn’t want to do it anymore.

Modeling was always a means to an end for you then?

It was, yes. It’s interesting for me to see girls that are really into the business. It’s just now that I can understand, appreciate and be compassionate about it.

It’s refreshing hearing you talk about it in this way because I think, particularly nowadays, it’s such an aspirational career for women .

I came back to the states and I bought a Volkswagen bus and I drove cross-country and I lived in Berkeley for a while. I got accepted to culinary school and I went did that. While I was on my externship, my agent in Miami had a booking for me for a one day shoot in the Keys for $1500 for the day. I was making $4.25 an hour at the time so I thought do I really hate it that much?

At the time I was broke and I was just getting by. I made the decision that when I graduated from culinary school I would give modeling one last try. After I graduated,  I moved to New York which is another thing I never thought I’d do because I never really wanted to live in the city. Within a few weeks of being in the city my agent sent me to Paris for the shows. As soon as I got there, I booked a Prada exclusive. It was just perfect timing for redheads and that was when I met Emily Sandberg.

I rode that wave, but even at the time I remember thinking it was a lot to deal with it; running around and flying to this place and that and doing all that work. I managed to save money and open a bakery so it worked out.

How do you feel about the industry now compared to when you began?

I think it’s still a challenging industry and I think it still has a rigid set of guidelines that you are held up against for sure. I’m older now and with experience I appreciate the opportunities modeling has afforded me more than ever.  I’m grateful and excited to still be working. I feel that I can offer more of myself on shoots now compared to when I first began in the industry.

Now that your dream of owning your bakery has come to fruition it must be very rewarding for you. It’s something that you worked very hard for and it’s been very successful.

How do you achieve balance in your life? You’re a mother, you’re getting back into cooking, you teach and you’re modeling.

I’m constantly trying to find balance and figure out how to spend great time with my son, build the baking business back up, model, do yoga and teach.  I guess that goes back to what I said earlier. I like to keep myself really busy.

Posted on May 1, 2015 by theculturalomnivore in Female Models