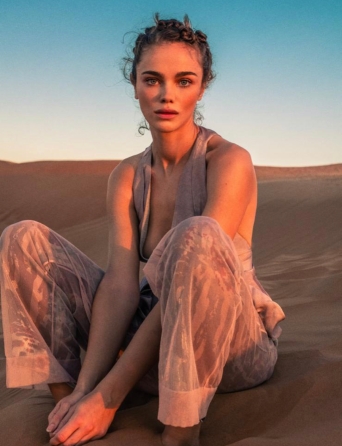 Jena Goldsack’s classic beauty—a delicate mix of both approachable and yet desirable—is the stuff of designer’s dreams. Jena’s portfolio is chock full of editorials for fashion bibles Vogue, and Harper’s Bazaar in addition to campaigns for Iceberg and Versus Versace. I caught up with the Cornwall born beauty as she talked about modeling and her involvement with Sea Life Trust, a cause close to her heart.

Tell us about your childhood growing up in Cornwall.

I grew up on the beach, quite literally. We lived in a house at the back of my local beach until I turned five where the first thing I would see in the morning—if we were lucky that day—were dolphins on the horizon. We then moved just up the hill to a bigger place where I would sometimes get up early to go fishing with my dad. I was quite a tomboy—as there was only one other girl in my class—and my parents already had two daughters. Being the youngest I became a bit of a son to my dad.

How were you discovered?

I was discovered in Falmouth by another model who was quite well known in the 90s. I didn’t really take her seriously until a few months later when I sent my photos to an agency in London who I’m still with.

If you weren’t modeling what would you be doing?

I honestly don’t know—I’ve never been a planner— but I hope something to do with the ocean. I studied Ocean Science for a while online, and I studied nutrition and how it helps with auto immune diseases, so I have a couple options. I studied Media and Journalism in school too so I suppose I’ve always had a creative side.

What has been the most memorable experience of your career so far?

For me the locations are the most memorable. Shooting in the desert at sunrise in Oman for Condé Nast was incredible and the most peaceful thing in the world. I was so taken aback and happy to be there. Also, when I was shooting on a glacier in Iceland I heard and saw the icebergs flipping over. The colors were insane and it sounded like a thunder storm.

Environmentalism is a cause close to your heart. How have you leveraged social media to raise awareness around the cause?

I probably annoy some people on social media with what I share but someone’s gotta do it. Someone messaged me telling me I share “liberal propaganda,” but I don’t see how sharing facts about our environment and the climate is wrong, and for the most part people thank me for sharing useful information. I don’t want to feel like I’m forcefully guilt tripping my followers, so some days I post about it and some days I don’t.

What do you think is the defining social issue of our time?

I don’t think there is just one defining issue right now, there are a ton. In many ways we have stepped forward with things like the #MeToo movement, but in other ways it feels like we have taken a step back and become polarized with our own opinions about things like race and gender equality. 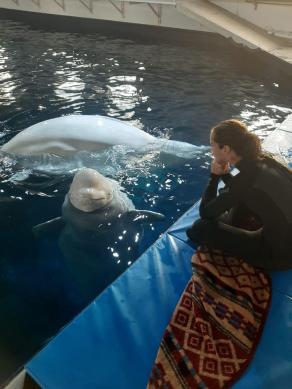 Talk to us about your involvement with Sea Life Trust.

I could talk all day about the Sea Life Trust. It is a charity where they have aquariums all over the world. I grew up by the Cornish Sea Sanctuary and earlier this year they helped move two beluga whales from an aquarium in China—where they had been captive for 11 years—and flew them to Iceland to be released into the worlds first sea pen sanctuary next year. As these whales have spent their whole lives in captivity it is not possible to ever release them into the wild. They depend too much on human interaction so Sea Life Trust came up with the idea to recreate their own environment while still being looked after. I went to Iceland last weekend to raise awareness about this and we shot a story about it. These whales love humans so much they’re like dogs—it was extremely surreal—they love their tongues being rubbed and they come out the water as much as they can to get a scratch or a rub from you. They’re literally gentle giants. One of the whale’s trainers at the sanctuary moved from Shanghai to this tiny island in Iceland just to be with his whale that he has this deep connection with. I witnessed them talk to each other, and blow water at each. There will be enough room for 12 belugas in the sea pen so hopefully other aquariums will follow suit once they’ve seen that this has been a success.

Where do you see yourself in five years time?

Again, I’m no planner but I probably should be. I’d love to be involved with more charity work—preferably something to do with the ocean. It’s a shame I can’t be a mermaid. I just completed my diving course so I’d like to be cleaning up the ocean like I’ve seen these divers start to do. Also, coral planting is on my list—they have coral gardens where you can help the dying reefs come back to life. Hopefully I’ll still be a model in five years—thank God for my baby face—as modelling has helped me fund my side projects, which is great.

I used to clean caravans and I won’t ever let myself forget it. A caravan park is like a trailer park for you Americans—we all come from somewhere.

Posted on October 14, 2019 by theculturalomnivore in Female Models