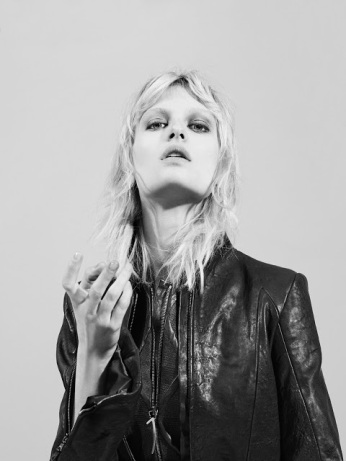 Rising star Veronika Vilim traded the gritty streets of Manhattan for the runways of Milan and Paris, and she can be seen peering out of the pages of glossies in campaigns for Marc Jacobs and Saint Laurent in addition to boundary-pushing editorials in leading fashion magazines. I spoke with the platinum haired beauty with rock-chick sensibilities about growing up in the city that never sleeps and her furry obsession.

What was it like growing up in New York?

Growing up in New York I always felt like I was in a bubble that never slept. I knew that everything was growing around me so quickly, and I wanted to keep up with it all. It made me realize at a young age that I will always be growing, transforming, and I must let myself go but also hold on tight for the ride of life. Having everything in the palm of my hands since I was a kid really made me realize I can be, act, and do whatever I want. I love New York and I love growing with it around me. I am grateful to be influenced by it every day even the good and the bad.

Tell us about how you were discovered.

Modeling was a fantasy of mine as a kid—ever since I can recall people have told me I should be a model—but I was short until I turned 15 and then I grew 7 inches in one year. That year I walked into a few agencies and everyone showed interest in me. In that moment I realized this dream could become a reality.

How has your background in performing arts influenced your approach to modeling?

What was the moment when you felt that you’d finally arrived?

I would say that I arrived at birth, but I actually arrived when I realized that confidence is the most important thing. When I felt it I was truly “there”. It’s something that is always growing and realizing that I knew that this would be the closest I’ll ever be to actually arriving.

What’s been the highlight of your career so far?

Wow, I’ve had a lot of highlights. Chopping my hair off and dying it blue for Marc Jacobs was next level—I always wanted to do something like that—but between ballet and modeling I couldn’t do it. When this came along I was crying with happiness. Shooting the Marc Jacobs campaign with the hair was super special and surreal because I always wanted to work with him.

What have you discovered about yourself through modeling?

I can be who I want to be and people are willing to accept me for who I am. It has helped me realize that conforming is not helpful, and telling anyone I can’t or I’ll try will never work. Always say I can and see where it takes you.

Outside of modeling what do you do to decompress?

I am obsessed with stuffed animals, and have had a plushie obsession since I was a child. As a kid I remember going to Disney World and throwing myself onto any stuffed creature. My mom saved a bunch of my old stuffed animals and I have also been collecting them. I have a room in my apartment filled with them.

Posted on February 19, 2019 by theculturalomnivore in Female Models