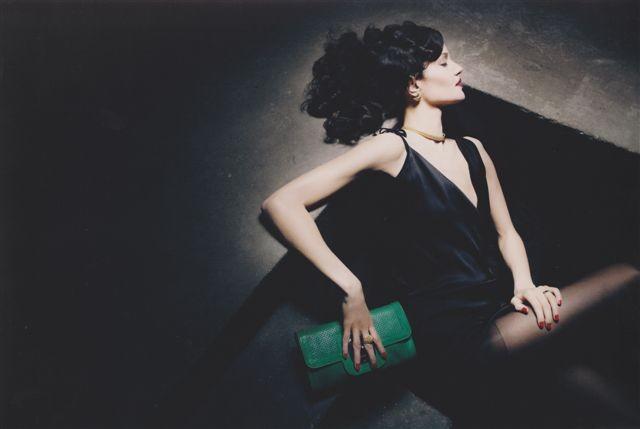 Claudia was a dance student when she was discovered at a music store by a scout and went on to become one of the world’s top models, working with designers that included YSL, Karl Lagerfeld, Versace, Armani, Gucci, Valentino, Marc Jacobs, and Calvin Klein. She was also featured on the covers of such magazines as Vogue, W, Mademoiselle, Elle, Cosmopolitan, and numerous foreign publications. I spoke with Claudia about modeling, her transition into acting and so much more.

Start by telling us how you were discovered and the genesis of your career.

I was born and raised in Manhattan on the Upper West side. I was a dance student at The School of American Ballet. When I was 13, I was with a friend from junior high school at Tower Records when a modeling scout came up to me; that’s how it started.

What were your thoughts when you were first approached?

I was a 13-year-old dance student at a private school on the Upper West Side. Modeling was the furthest thing from my mind.

Modeling has become such an aspirational career. Guys and girls are a lot more clued in. What are your thoughts?

I think people are still discovered at 13, but it was rare then. The girls today are not working full-time at that age, at least I hope not, because they’re still in school.

What changes have you noticed from when you started?

I think change is always good. We all change so why shouldn’t an industry? I think the entertainment field changes much faster than other fields. Especially with fashion, the turnover rate is very fast. I think social media has changed everything and that’s good. There are more publications on-line now. The business is growing so there are more opportunities for work.

There was some backlash about the location of New York Fashion Week because it became so commercialized. Bloggers have popped up over the past decade and have a prominent position at fashion week. That upset some people who have been in the industry a long time and consider themselves experts and I understand. Then again, these bloggers and social media are bringing fashion into the world more rapidly than before so there’s more money. We tend to, as a people, complain about change and getting more commercialized, but then again it’s better business. It’s a Catch-22.

What effect has social media had in your experience? Has it been relevant?

I love Instagram. I don’t love Twitter. Instagram is instant; which is where the insta comes from. You don’t have to use words. You can just take a picture, upload it and you are done. It makes so much more sense because we are all so busy running around. It’s no wonder that stress related illnesses are on the rise for people under 40.

You sound like you have a lot going on.

It’s kind of kooky how we’re all going, going, going and then responding to our computer and smart phone throughout the night. I like it but it’s affected my life. I am more busy now with projects. I want to be more on social media now.  I want my voice to be out there more. I think it’s fun to explore these different social media platforms. I was against them for a long time but now I feel more positive. We all communicate better now and it’s changed everything.

Do you find constant communication to be a distraction?

It does feel that we are distancing and drifting apart and not connecting with each other face to face as a people. We’re always on our smart phones and gadgets, but you have to go with it because you can’t live in a cave and rebel against it.

Were you against it?

At first yes. You know, I enjoy it. I’m finally learning that I don’t have to use it to say how my boyfriend is doing for example. I can do it my own way. I can use social media for me. I’ve learned to make it my own.

You’ve had a full career and one of longevity in an industry dependent on change.  How have you been able to do that?

It’s a great question. Besides luck, it’s the time that I came in. The industry wasn’t as massive. Elite and Ford were the only two relevant agencies. There was nothing else. In some ways it was a smaller industry. I was blessed that I started at the top of the industry in a wonderful time in history.

Do you think the longevity you had will sustain today?

It was really the time in fashion. I don’t know how else to think about it.  My peers from the 90’s are all working.  Helena Christensen and Christy Turlington are still working. I pulled out to focus on an acting career and didn’t fully keep up my commercial profile. I’m blessed to be able to come back into it because it was the time but look at Giselle and Kate Moss; they’ve had long careers. A lot of us in my time were having long careers but now you just can’t tell. Take Cara Delevingne and Karlie Kloss for example. We all love them but how long does a career at that top-level last these days?

Can you touch on your transition into acting?

I grew up in an artistic environment. My dad is a playwright, director and author. My mom wrote and acted. I always wanted to act and dance. Modeling came and it was a great opportunity. I don’t want to put down my profession, because it takes a lot to be a model, however, I found it limiting. I needed to express myself outside of walking a runway.   I needed more. I think of the quote by Joseph Campbell “Follow your bliss and the universe will open doors for you where there were only walls.”  That’s what led me into acting. I’ve had a great time making films and being on TV and producing and acting in theater. Moving to Los Angeles was very unsatisfying so I went back into modeling. I’m redefining myself. I’m writing a book and doing a variety of different things as well as acting.

What did you find disenchanting about LA?

I have such great friends there and I love to go to LA in the winter. It’s a tough city when you love walking everywhere and LA is a sprawling suburb. New York is alive and the hustle and bustle just isn’t there in LA. That’s the difference. LA is not an international city.

You have a somewhat ambiguous ethnic look. With a limited beauty ideal in the industry, did you ever come up against anything?

Not to my face. I just sailed through because I started at the top. If that happened I was not privy to it. It’s unfortunate when someone’s background affects them getting a job or not. I think that change is already happening. Campaigns and beauty contracts are going to all sorts or beauties. I mean, Christy is mixed. Helena is mixed. I just saw Helena last night and I’m going to be working with Christy coming up. It’s fun to have a look that nobody knows what it is. But I don’t think we’ll ever get there as a people.

Any advice for yourself at age 13?

Have fun! I had many experiences traveling. It’s a fun job. Sure it’s hard work and there are downsides, but it’s fun. I took it too seriously. Enjoy the journey, enjoy the moment. It moves by so fast.

Posted on March 10, 2014 by theculturalomnivore in Fashion, Female Models