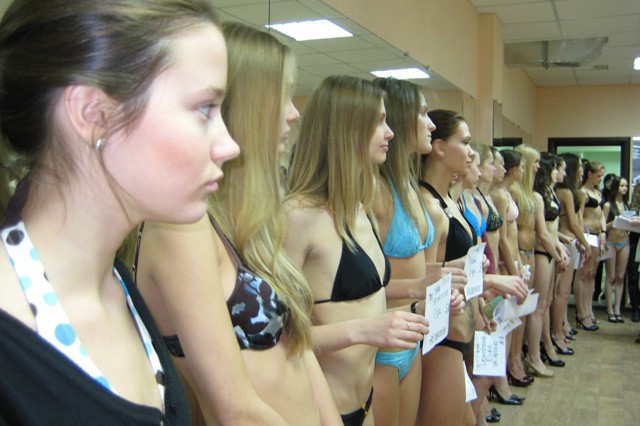 What motivated you to make the film Girl Model?

In 2007 Ashley Arbaugh the scout in the documentary approached us with the idea of making a film.  Her idea was to make a film about modeling and prostitution and the foggy line between the two.  After a year of discussion and trying to figure out what story we wanted to tell, we decided to make the film largely in part because of her.

What challenges did you face when making Girl Model?

I think the biggest challenge we faced was dealing with Nadya and the other young model.  The film is framed in such a way that we were behind the camera and it was difficult to know when to step in and when not to. We stepped in a lot and that isn’t shown in the film. It was important to us not to make their situations any more difficult than they needed to be, but at the same time we were documenting and we wanted the situation to be as authentic as possible.  It was tricky to have them not rely on us too much but at the same time knowing when to help them.

What biases, if any, did you discover you had about the industry during the process of making the film?

I didn’t come from the fashion world and neither did David (Redmon). I knew very little about the industry. What I knew is what most people probably know like walking down the street and seeing a billboard or looking at magazines in line at the grocery store.  I hadn’t engaged with it in such a personal and intimate way and I had no real understanding of it.  These images look back at us and the question for both myself and my partner David became to ask what is going on behind the image.  The labor and age of the models are things we now question when we look at fashion advertisements.

Do you think models that are scouted in developing countries are at a greater risk of being exploited and why?

I wish it was that way. Unfortunately, when we screened the film in association with The Model Alliance and invited models, casting agents and designers to view it, the universal response we got from people was that this happens everywhere.  It is pretty unremarkable that it’s an industry that is unregulated.

What action can the audience take to empower themselves after watching the film?

Recently, with our partner The Model Alliance , we created a petition to give child models the same protections as all child performers.  Models aren’t protected  under the Department of Labor unlike actors. We are targeting the state of New York to protect models under the Department of Labor to ensure the fashion industry abides by these laws.  I can’t encourage people enough to sign the petition.

The film explores subjects such as isolation and vulnerability. Was this intentional or a reflection of reality?

The isolation was something we saw early on when Nadya got to Japan and we wanted to contrast that with her experience in Russia where she had a support system, family and school. There were specific choices we made to bring out the feeling of isolation because that was something that really stood out to us.  That’s why we chose the color palette that we chose with Russia and Japan.

What regulations would you like to see implemented to protect working models?

I think any regulation is a step in the right direction when you don’t have any.  There have been movements in the fashion industry but the hard thing is there needs to be an external body or set of laws as opposed to the industry regulating itself.

Veteran model and scout Ashley Arbaugh expressed disdain for an industry she continues to work in and profit from.  How do you feel about her decision to continue working in the industry?

I think Ashley is a very complicated person. The fact she approached us in 2007 and was involved in the industry but at the same time wanted to be a whistleblower is something that initially attracted us to the story.  I think her motivation changed during filming. I think at the beginning she thought she was going to get out of the industry and as the film progressed she got deeper into the industry.

What message would you like the audience to take away from the film?

I’d like people to look beyond the images staring out at us and wonder who these girls are and where they come from. These images are part of our consciousness and daily lives. We all are active participants with what is happening in the fashion industry through our consumption of these images. Humanizing the models and asking ourselves the tricky questions like why we are looking at young girls to represent women’s bodies and why we use such young girls is critical.

Posted on March 26, 2013 by theculturalomnivore in Fashion, Female Models