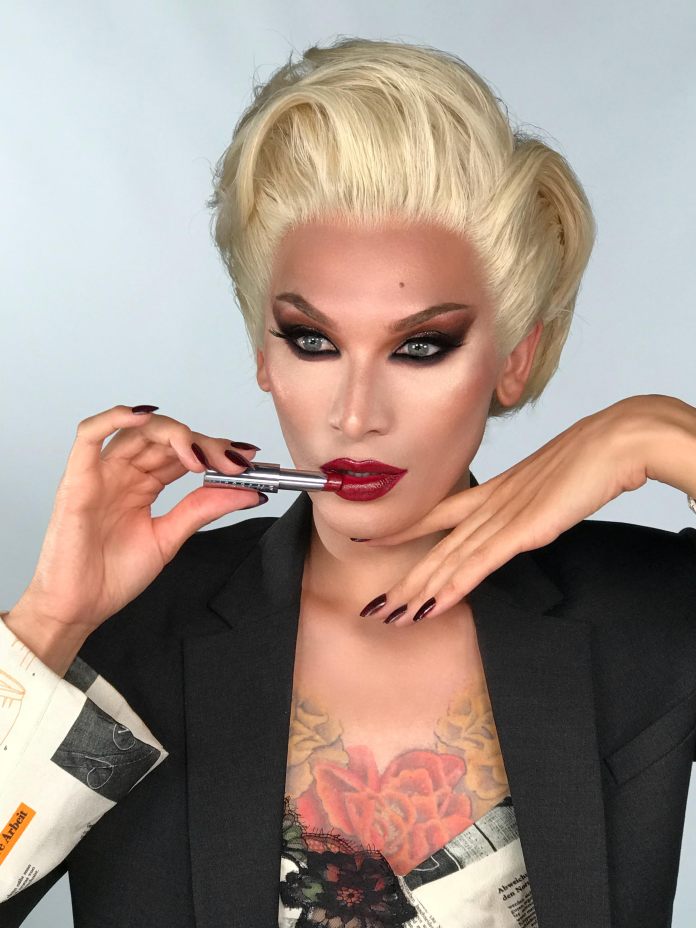 Entrepreneur, model, makeup artist, drag queen, and RuPaul’s Drag Race alum Miss Fame shows no signs of slowing down. She was a spokesmodel for L’Oréal Paris, the first drag artist to walk the red carpet at the Cannes Film Festival, and has appeared in the pages of German Vogue, V, Love, and Elle magazine. With the launch of her beauty line Miss Fame Beauty, I spoke with her about her humble upbringing and the value of self-belief.

You grew up in California, right?

Growing up did you have a clear idea what you wanted to do with your life? Was becoming a makeup artist something you always wanted to do and were you even aware that that was a career path?

No, because I grew up in such a contained environment. I mean, it’s a farming community, and the electives you take in school are welding, wood shop, and beef production management. I grew up close to the ocean—it was just 20 minutes away— but we were a bit inland, where work is very agriculturally driven and everybody was running wineries. It’s beautiful and very much has a country town vibe and a small town mentality where everybody knows everybody. I went to school with the same people, and everybody knows what they are going to do living there. I had to evolve and discover myself.

After graduating from high school, how did you end up discovering your path?

I knew at around 12 that I was gay—although I didn’t act upon it—and I had a realization that I wasn’t going to be able to live a life like everybody else in my family. Growing up in a small town, the people who usually stay learn a lot of the same traditions and have the same value system as everybody else. The gay community within my school was so tiny. There was a lesbian, my gay friend Jose, and another guy who was effeminate and ended up committing suicide. I remember thinking that we didn’t have a lot of resources and I didn’t feel safe. I was an artist who found my expression through my life circumstances, such as the trauma I experienced from the death of my dad and the death of my grandfather who raised me, as well as having a mother who struggled with addiction. I found an escape through art and beauty, and I always loved creating beautiful things. I had a natural talent and found my voice through my art.

How did you channel that expression initially? Was it through painting, music, makeup, or is that something that evolved later?

I grew up with a lot of uncles and aunts in the same household because my grandparents were mixed families. There was a large group of adults living in the house, and I was in kindergarten, so there was a giant age gap. Watching these adults, I had a lot of respect for them, and the women were so dynamic. They would get ready and put on makeup to go out for the weekend or to go to the football game, and I would watch them thinking it was so alluring.  I really loved listening to them gossip in the bathroom, doing their hair, and putting on their eyeshadow,  When I was home alone,  I definitely tried on some of the makeup that was in the pullout drawer in the bathroom. It was a drawer that had a bunch of hodge-podge; everyone’s stuff was in there. I would put on eyeliner or try on my grandmother’s high heels.  When you are little and you put on makeup, you don’t realize it takes a lot of work to remove it. I would have a raccoon eye and be like, holy shit I am going to get into so much trouble. There was an allure to beauty.

How did you discover drag?

It was evolutionary. Once I turned 18 (I am 33 now), I started partying and exploring the gay community that was in my county. I would go up north to a very small gay bar that opened twice a week. We would get in, and although you are not legally allowed to drink until you are 21, I would always get drunk. I was discovering myself, and in the midst of discovering my own sexuality, I also discovered my expression. I have always felt makeup was a form of protection because I didn’t have perfect skin and so I used some makeup to make me look better. My youngest aunt picked up my first CoverGirl foundation. I was so afraid to shop for makeup, because I felt like somebody was going to catch me. In the midst of all this, I found a community that was open and embraced me, and I felt like I had found my place. That’s when I started performing drag. I first performed when I was 19 and I did really well—I actually won a competition.

How many years later did you apply for RuPaul’s Drag Race?

Oh, many years later. I had moved to Northern California and enrolled in beauty college and discovered I could make people feel good about themselves by making them feel beautiful. I got my license, started working, traveled, and pursued modeling. At that time I had been in front of a camera for a number of years and had always worn makeup. I had a photographer tell me he didn’t suggest that I pursue this further, and I remember feeling that I hated people telling me what to do. I’m not willing to let that guide me. I then moved to New York and fell in love with New York. I was in a relationship and we slept on couches, toughing it out. I got a job at MAC and stopped doing hair as soon as I got to New York. I then got fired from that job but started working with celebrities. I was asked to audition for season six, so I was 29 when I made it on the show. I had been in New York for 3 years before I got on the show.

I didn’t know what to expect. Reality television is beyond your control. You have to be so strong in every arena, you have to be quick, you have to be talented, and you have to be able to handle anything that’s thrown at you. I realized that I am a sensitive person who doesn’t do well in competitions. In life I fight for what I want and that’s why I have a career, but on television I didn’t understand how to work it. I had never been on a show where I had to be in a room with people that were just dying to succeed. The exposure is great and you get a kick of momentum, but you are 100% responsible for the maintenance of your career. It’s crazy, but what I did get was a lot of experience. I learned how to become a better artist and performer. I also mentioned on the show that I wanted to work on a book, so I took my time to do that right.

There seems to be parallels between your story and Kevin Aucoin. Do you identify with his story and who has inspired you?

You nailed it. That is a great comparison, and I totally appreciate that. I have a few of his books, and I look at the way he structured faces and try to recreate those. I know a few people in New York that worked with Kevin, and I’ve tried to find out any tidbit of information I could from the icons of the 90s. The supermodels were a huge part of that for me because they were beautiful, untouchable, and luxurious. Even though I grew up very humble and broken, my expression was always to make something that felt strong, safe, alluring, and perfect. I really am a perfectionist. I am never happy until it’s really what I want it to be. Kevin is somebody who created an emotional connection with the people he worked with and he could back it up with his talent.

Tell us about how your beauty brand evolved.

I have always been able to get what I want when it comes to what is within my wheelhouse. I know what I want and I reach for it and get it. I believe that everything I had ever aspired to I could manifest. It’s like anything in life: if you want a better body, go to the gym and you are going to get a better body. I had conversations and did some research right off the bat, but it came down to finances. I developed something that’s my own and that I get to stand by. I had access to a really great team, and we get to tell a story. I turned my lipstick shades into five different provocative women and that’s exactly how I wanted it to be perceived. We didn’t have major budgets to do this. We made something out of passion with a team of people that wanted to be a success. That to me shows that your dedication for your craft will attract talented people so that you can achieve your goal. And it goes without saying, it takes a lot of hard work.

Posted on October 18, 2018 by theculturalomnivore in Beauty, Fashion