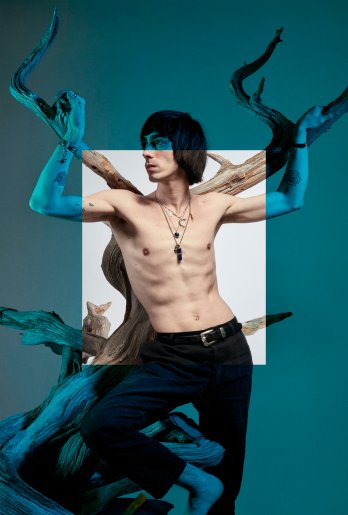 With a bohemian spirit that infuses all of his work, model, and artist Vincent ‘Vinny’ Michaud has forged his career on his own terms. From towering billboards over the streets of New York for CK One to the pages of Italian Vogue, Vinny has parlayed his talents into styling, photography, illustration, and music. I spoke with him about his unconventional upbringing and his journey to where he is today.

You had somewhat of a peripatetic upbringing. Tell us about your childhood.

Well, my childhood is a bit of a long story. I was born the youngest of three in a single parent household. I was raised by a very young mother who had me when she was 23 years old, so we kind of grew up together. That can be both a positive and a negative experience with the lines between these polar opposites and the lessons learned being vast and often blurred. We moved around a lot and that often left me as the new kid in school, which can be both a good and a bad thing. It can leave you quite lonely saying goodbye to friends and finding yourself the strange loner walking the halls of unfamiliar schools, hearing whispers of look at the weird new kid. On the other hand, it helps to solidify one’s identity with no room for fear and no choice but to be anyone but yourself. I was forced to learn how to quickly adjust and make friends. We often struggled with very little money, which was very hard but definitely taught me the value of hard work and how to take care of myself at a very young age. You quickly learn to be happy with very little.

Were you actively pursuing a career in fashion when you moved to Los Angeles and began working as a model?

Honestly, at that point I was 14 years old and had just been emancipated from my parents, so I was in survival mode and trying to not screw up my life. I know it sounds dramatic, but I had too many examples of who I didn’t want to be and was focused on creating who I would become. Even at that age, the one thing I knew for certain was that I was an artist. I knew art was the only thing that would save me and give me a life, so I did my best to take advantage of any and every creative outlet I could find. I did it all, whether it was painting, illustrating, sculpting and building things, dancing, or acting. I never pursued anything specifically. I was, however, highly aware of fashion, style, and aesthetics as a whole. It was really by accident that I started modeling around the time I was 15 or 16 years old. I was drawing portraits of people on the street for extra cash, and—you know the classic story—a photographer approached me to shoot. Honestly, I thought it was a bit of a pervy situation so I was slightly hesitant. I then came to find out the guy was an art and fashion photographer and was quite accomplished. I started shooting with him and then with others that same summer. I landed a great gig shooting on a weekly basis with Paul Jasmin’s fashion photography class at the Pasadena Art Center, which was great because I got paid weekly to just hang out with my friends and shoot. It was always creative and collaborative, and it became a regular exercise in performance art for me. I was on my way right back to New York for my first fashion week and signed with New York Model Management.

How do you think your background informed the way you approached modeling?

Good taste and aesthetics are qualities that may be able to be copied, especially in this day and age of oversaturation, but they are not qualities that can be bought—unless I’m styling you (just kidding). But seriously, growing up with a strong awareness of aesthetics in music, film, and art as a whole really helped. Knowing those cinematic and musical characters was everything, as well as understanding what is wanted and needed from you visually when you are a model and having the ability to become that. You have to create it in yourself and inspire it in those you’re working with—the photographers, stylists, and casting directors—regardless of whether or not you see it in yourself. For me, it was a lot easier to do that by treating it and translating it into an act of performance art. Now as a stylist, I understand it was also simply enjoying the fun of playing dress-up. It’s half acting and half being comfortable enough to be your true self. A fake person is never going to be as inspiring as a real human being.

Although you are probably most well-known for your modeling work, you’ve had a long and prolific career as an artist. How has your childhood informed your work and artistic identity?

Growing up in a harsh environment, the usual status quo is that art and sensitivity is a weakness. On the contrary, despite all my family’s problems and our ruff exterior, art was seen as a sort of magic that should be respected and celebrated. The joy and beauty it gives was understood to be priceless and an integral part of our collective identity as humans and creator beings. Though it may sometimes feel like it’s being used as just another tool to sell, it’s the one thing we can give ourselves and share with others that contributes to making the world a better and more beautiful place. At least that’s what it’s supposed to do in my opinion.

As an artist you employ various mediums: photography, fine art, and music in your work. Which do you think is the purest expression of yourself and why?

When people ask me what I do, it’s always a hard question to answer. Having to list off all my crafts becomes an exhausting task, and I try my best, but I always end the answer with I am a painter by nature because it was truly the first manifestation of my expression. From the first time I can remember, I’ve always been in love with creating images and telling stories by starting with drawing and painting what I see and feel. It was, and still is, a kind of therapy for me, and that tradition has continued through to every art form I’ve been a part of.

How would you describe your aesthetic?

Oof, that’s a strange one. I guess all I can say is Vinny—a weirdo, a goof, and a badass all in one. My own version of the father, son, and Holy Ghost manifested from the non-physical to the physical. Just like everyone else, I’m striving for honest individuality and connection.

Iconography is heavily imbued in your illustrations and paintings. Do you consider yourself religious?

Ay Ay Ay, that’s another hard one. I want to give the typical response of I’m not religious but I am spiritual. I believe we are all spiritual as the beings of spirit that we are. To me, religion is the ritual act we perform to express that spirituality and the search for truth and meaning we all crave. So, if my interaction and will to influence my own perception could be called a religion then yes, I am religious, but if you want to know if I worship any specific unknown entity I hold responsible for my creation, then no.

What or whom has been the greatest influence in your life?

My family. The good, the bad, and the ugly has, and will always be, a great influence on who I am, including my sister’s willpower, my brother’s strength and perseverance, my mother’s heart, and the memory of my father who passed away when I was young. Seeking to understand the man that he was and the search for my identity through that loss has made me the man that I am. I have to say that my best friend, husband, and partner in crime, art, and life, Pablo, has extremely influenced on who I am as well. The connection and constant source of inspiration he gives me proves every day to be the most beautiful and precious gift this universe has given me.

Probably that I’m actually a lot nicer than I appear to be before you get to know me. At least that’s what they always tell me.

What projects are you currently working on?

Along with the constant styling, art, and fashion directing work I do, I’m currently involved in a few different projects at the moment per usual. I am in the middle of a long-term illustrating project that will be a combination of a graphic novel and animated film centered around the occult or hidden mysteries of our world, where I’ll be delving into the ancient world, our prospective future on this planet as humans or whatever we’ll become, and their effects on our current state. It’s a bit of truth and a bit of conspiracy. I’m also working on a directorial film piece that will combine poetry, music, art, and fashion, where I’ll be using the character of an artist moving through time as a metaphor to describe the hero’s journey. Last, but not least, I’m working on a couple of collaborations with my husband Pablo that I am quite excited about at the moment. The first being the book cover design for his third and latest publication of poetry, titled Bodies/Cuerpos.  This will be his first bilingual work in both English and his native language Spanish—his previous work all being in English. The cover design will also come along with a piece of animation I’ll be doing as well. The book is set for release this summer. The second collaboration is a project in which I’m acting as a kind of managing visual arts and media director for a brand new music project with Pablo as main vocalist along with fellow musicians and friends Florencia Zaballa Moon and Jamie Del Moon. I will be their personal band photographer, imagery maker (covers, posters, flyers), video director, creator of visuals for live shows, and simply put their biggest fan. I am so proud of this project and the amazing music they are making. With tracks set to be released this spring, keep your eyes and ears posted for this project. The band is called Ensalmo.

Posted on February 26, 2018 by theculturalomnivore in Male Models