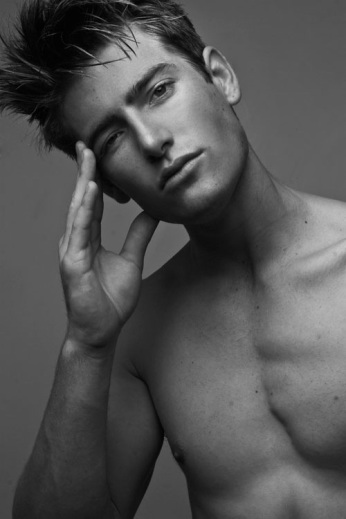 With matinée idol looks, Justin Hopwood landed the cover of the Abercrombie and Fitch Quarterly and has become a mainstay in the Ralph Lauren family fronting campaigns for the brand season after season. Named by Models.com as one of the industry’s Money Guys, this native South African routinely has clients calling on him.

Tell us about how you got started as a model.

My younger sister, who was modeling at the time, dragged me into her agency to do some admin work and a gentleman by the name of Byron Kealumans asked me if I was interested in modeling.  I told him I wasn’t really interested. He asked me to grow my football inspired mohawk out and clear up my skin. At the time I had pretty bad acne. Once I followed Byron’s advice, I did a little work here and there in South Africa and then in 2010, Bruce Weber scouted me for an Abercrombie shoot. He flew me to Miami where we shot and one week later Jason Kanner, the owner of Soul Artist Management, signed me. Within minutes of meeting Jason he sent me to Ralph Lauren. A month later I shot my first ad with Ralph and then the rest is history.

Hailing from South Africa, what were the biggest adjustments you made living in the US?

I guess the culture and the exchange rate. Oh, and the weather – we don’t get snow in South Africa.

What do you hope to get out of modeling?

I hope to grow as a person as much as possible and really embrace the opportunity that I’ve been given.

Models Bridget Hall, Tyson Beckford and Tanga Moreau all had longstanding relationships with the Ralph Lauren Corporation much like yourself.  How does it feel to be part of such an iconic brand and family?

It’s a really special feeling! I remember growing up seeing all of the iconic Polo ads with Mr. Beckford. Now I’m able call him a good friend and work alongside him which is very special to me. Ralph Lauren has used the most iconic models in the world over the years and I am beyond grateful and humbled to be a part of the team. They really are like family.

What has been the most memorable moment of your career thus far?

I would say all my shoots with Bruce Weber since day one with Abercrombie. The Big Pony fragrance and the new Polo S/S 15 campaign are also up there. Bruce Weber is really special to work with. He knows how to bring something out of you on camera that’s special and really captures a moment.

I’ve had a unibrow since I was ten years old that I constantly have to tame.

What have been the biggest challenges you’ve had to overcome with modeling?

The distance from my family.

What’s the best piece of advice you’ve been given?

Jason Kanner told me to “stay humble and be patient”.

What are your goals and aspirations for the future?

To invest in property and grow as much a possible in both modeling and as a person.

Posted on November 12, 2014 by theculturalomnivore in Male Models