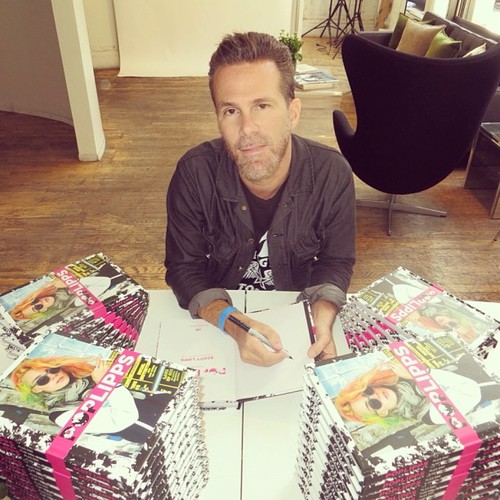 Model mogul, Scott Lipps, represents some of the biggest names in the business.  Name checking the likes of Claudia, Eva, Helena and Bridget Hall, Scott’s presence isn’t just limited to managing one of the hottest agencies on the planet.  Scott’s influential blog is serialized in Interview magazine and now in his new book Poplipps: Plus One.  I recently caught up with him to get the low down on his new venture and what to expect from him in the future.

You have a dominant presence on social media.  Did you always want to create a book and how did Poplipps: Plus One come to fruition?

To be honest, it was from the urging of my publicist.  The blog was not my initial idea but when Tumblr put it on their spotlight and it started to get heat and develop a loyal following I devoted every morning from 7 – 8 AM, just about, to it over the last few years.  The book came about via the blog and the publisher actually offered us a deal after the first lunch meeting as he was familiar with it.  Colette and Fred Segal have signed on to the carry the book as well as lots of others so it’s really exciting!

How do you feel about the media’s preoccupation with celebrity?

Celebrity is a reality of our culture today.  Reality stars are on the cover of the biggest magazines in the world and people are becoming celebrities due in part to social media, it can’t be avoided.  You either figure out the future of where media is heading or you get left behind.  I’d rather figure out where it’s going.

How do you see this book as an extension of the Scott Lipps empire?

I’m flattered that you think it’s an empire but I do feel it’s a direct extension of the brand.  The book features countless models, supermodels, celebrities, musicians and lots of people we represent so it just further solidifies the ONE brand.

How is the perspective of this book unique?

What projects can we expect to see from you in the future?

Definitely expanding the entertainment celebrity division we have, breaking more great models, more music from Courtney Love and more branding of the great people we work with.  Stay tuned, 2014 is around the corner!

Poplipps: Plus One is in stores now

Posted on October 3, 2013 by theculturalomnivore in Fashion, Female Models

One thought on “Scott Lipps Talks Poplipps: Plus One”