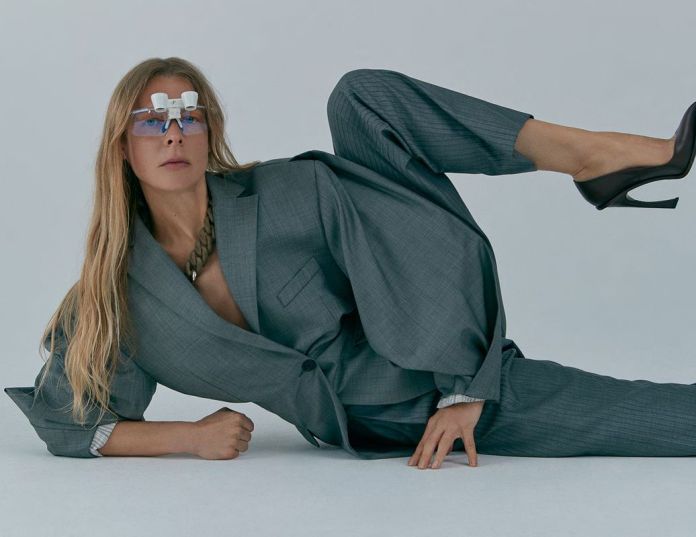 Laura Morgan the lithe, flaxen-haired beauty with a steely gaze has a philosophy on life many of us should take heed of, “You create the life you live in. No one will give you what you want. You have to go get it.” Before I was introduced to Laura last summer I had a superficial knowledge of her work—most notably as Alexander McQueen’s in-house model—but to define her as just another model would be myopic and underrate a career spanning the past 20 years. In addition to appearing in ad campaigns for Helmut Lang, and Celine she has worked on three Madonna world tours, and done costume design on award-winning video and movies.

Collaboration is a constant theme that runs throughout your career. Talk to us about how you’ve approached, managed, and maintained these types of relationships.

Different projects require different types of collaborative approach. However, what runs through all of my collaborative work is the need to treat everyone as I would like to be treated myself, to be patient, open, and never forget that it takes the hands and talents of the many for a project to be completed. No matter the job title all involved are equally important and should be treated that way.

What prompted you to return to school and study fashion design, film, and music in a more formalized setting?

I had got to the point with modeling where I was so stifled I got sick. I basically had a nervous breakdown. I left New York City and went back to the U.K. to be with my family and friends. I have never ever in my life felt so empty. Looking back the emptiness gifted me space to fill myself with new experiences, and I was so raw I could feel what was right. Life had seen me leave school earlier than most, and my trust in the system was virtually non-existent. However, I was at a loss, exhausted, and needed some guidance. There were three things that I loved: music, characters, and design. I really enjoyed the film and music courses I took but once I was at Saint Martins doing design I discovered how much I had learned from working with Lee and his team, and all the other designers I had had work relationships with. I also recognized how much I enjoyed building characters through clothes. I decided that was where my interests lay, and I noticed my money was rapidly running out. I left and went back to N.Y. and became first assistant to Patti Wilson and then to Lori Goldstein. I worked on editorials for Vogue, W magazine, music videos with artists such as Missy Elliott, fashion shows, and ad campaigns. That was my transition to being on the other side of the camera career wise. I continued on that track for the next 12 years. I have associate costume designed three Madonna world tours, four studio movies—of which one was Oscar nominated. I was a stylist and costume designer in my own right for Vogue, ID, and Vanity Fair. I won two prestigious awards for my costume design work for short film and music video. My own art benefited from the lessons I learned with film and music, and continues to support me in what I create today. I have not gotten any better in being in formalized settings. I’m a real hands-on learner which has its pluses and minuses.

Talk to us about the importance of art in your life and what it means to you.

I would kill myself without creating it and experiencing it. It is not a choice for me. It’s as
essential as breathing.

How did the Situationist and Dadaist artist movements influence your approach to life?

It validates my belief that all life is art.

Having worked across many mediums do you feel that one is a better expression of your self than others and why?

No. Since I quit working 24/7 nine months of the year for someone else, I have a lot more time to see my own artistic process. I go to whatever my body tells me is the best form for the expression to be released. I’ve really noticed how apparent this is from the project I am working on with my brother, Will Morgan, who is an incredibly talented artist. I don’t want to say too much about the project as we will be having an exhibition and a book release for it. I see the feeling and I want to share what it is that I am seeing. For example, I have a feeling—let’s take rage—I connect with it and ask how it needs to be released into a physical manifestation. My mind and my body work together to get the rage released. It could be to go out and photograph something that represents that feeling, it could be picking up a pen and allowing that rage to draw, it could be creating a scene of moving images, it could be sounds compiled together, or words spoken. I renovated a broken 1800s house—a livable sculpture that allowed me to physically demolish some of the issues I had around having a home—to create my very own safe space. I had no idea consciously that was what I was doing, I just knew I needed to do it. In hindsight I could see what it was about. I want to grow my skills of expression, I want the voices inside of me to be seen and heard, no longer caged within. I know how much it helps me in my life to see and hear other people’s voices being released. As I said earlier, all life is art. All we do is a creation.

You said “You create the life you live in. No one will give you what you want. You have to go get it.” For anyone reading this who feels stultified, what advice would you give them to actualize their dreams?

Meditate. Be kind to yourself. Acknowledge that going for what you want is scary and it can make you feel vulnerable. We don’t make mistakes, we make choices that are correct at the time. Maybe later they don’t make the same sense as they did but that doesn’t mean they were wrong. Every experience expands your growth. Seek out people who support and love you and reach for them when you don’t feel strong enough to keep the demons at bay. Stay connected to your dreams. Write them on paper or keep them as a screensaver. Keep coming back to your guiding principles and trust that the universe has you. I have received most of what I have wanted and it has always shown up in a way that was different to how I thought it would look! Be open, say yes when it feels right and say no when it doesn’t. Rest, and laugh at yourself a lot.

How do you find balance in a world with so much noise?

My mainstays everyday are to journal on three pages of A4 paper as soon as I wake up followed by yoga—even if its just 5 minutes, it’s imperative to feel my body—and meditate for at least 5 minutes. I spend at least an hour on my own in nature. I discuss things a lot with those I can be my true self with, and I often binge watch too much telly.

What do you hope to achieve in the next chapter of your life?

Posted on August 27, 2020 by theculturalomnivore in Female Models