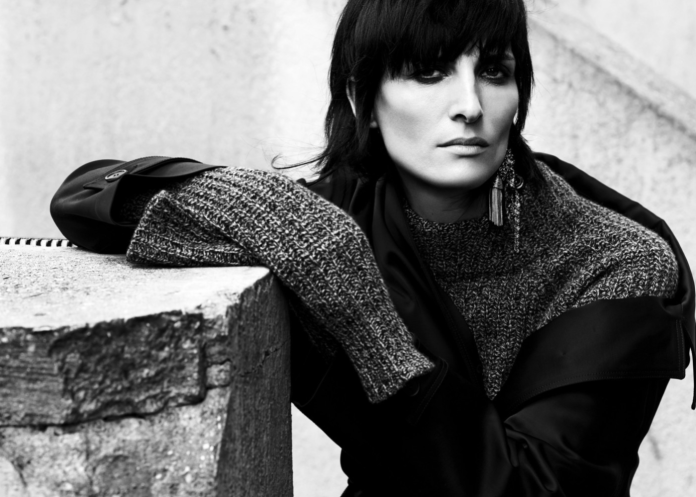 As one of the most in demand models of the 90s and 2000s, Kim Peers was at the forefront of the Belgian Wave of models that dominated the runways, editorials, and ad campaigns. From her multiple covers of Italian Vogue, to campaigns for YSL and Prada, Kim’s presence was ubiquitous. After making her return to the fashion industry Kim divides her time between family, modeling gigs, and her band Skemer.

Tell us about your childhood in Antwerp.

I was born and raised in Antwerp, and I grew up in a musical family where a lot of my family members play instruments or DJ. My parents love reggae but I was more interested in grunge, punk, and metal, and I later discovered electronic and new wave music. I was very interested in music and after hanging out with musicians I eventually started making music too. When I was about 19 years old I met Inge Grognard and Ronald Stoops, and so began my life in fashion and all of the traveling.

You were at the forefront of the Belgian wave of models in the late 90s. What was that period in your life like?

It felt like a roller coaster ride—fun—but sometimes it was too much. I didn’t have a lot of experience and I spent a lot of time traveling alone without a mobile phone, as in those days our call sheets were sent by fax. I think it’s much better now.

After a period away from fashion, how did you feel reentering the industry?

After working as a stylist in Belgium and giving birth to my two children I was eager to start traveling again. I enjoy modeling a lot more now than I did before.

Talk to us about the connection between music and fashion.

There is a big connection between the two and I wouldn’t know where to begin.

Tell us about the role music has had throughout your life.

Music has played a very important role in my life. I’ve always felt the need to express myself creatively so I started writing poems when I was 16 years old, and I painted and made collages while listening to my favorite music. Ultimately, music is my preferred form of expression. I write my own lyrics, sing, and create the music.

Tell us about the formation of your band Skemer.

From the moment I met Mathieu we wanted to spend as much time together as possible. After a few months of knowing each other he let me hear a few of the tracks that he made 7 years ago and asked me if I would sing on them. We are both experienced musicians so the process went quite fast.

What inspired the sound and direction of your band?

Mathieu and I both share a love for dark wave and post punk. We started with the tracks Mathieu created that were quite dark/cold wave and we continued in that direction. The process is very natural.

Not a lot of people know that I can sing more aggressively, which I did in my new wave/punk band Crimpers that is currently on hold. I’m also starting a similar project with a friend because it’s so much fun.

Mathieu and I are working on new material with Skemer and are going on tour in March.

Posted on February 3, 2020 by theculturalomnivore in Female Models